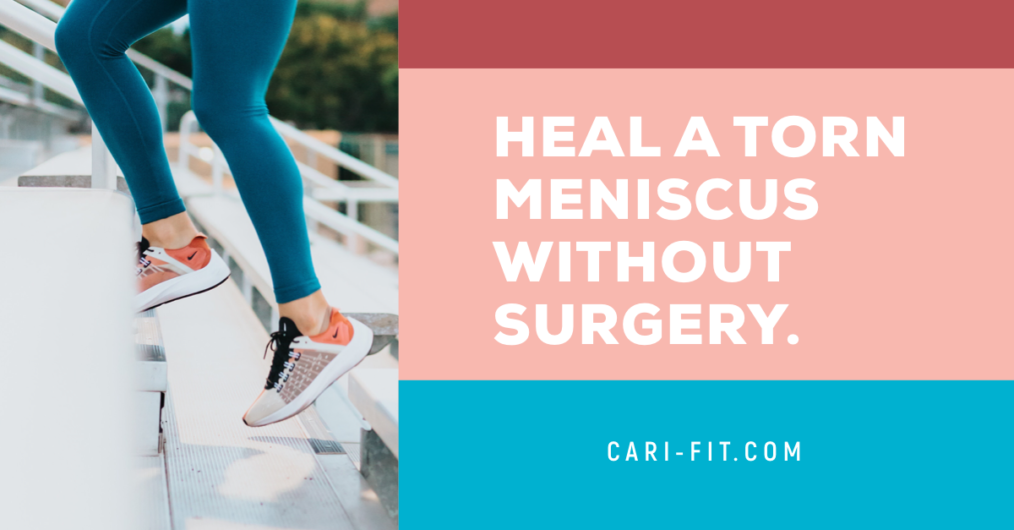 Over a year ago I had just signed up for another marathon and was excited because it was going to be my first one in a few years since having a second baby. Then, a few weeks into my training I tore both of my menisci in my knee and I was devastated. But, with some patience and dedication, I was able to rehab my knee myself and avoid surgery. I wanted to share my story in case any of you have been going through the same thing.

I’m still not sure how it exactly happened but one morning I realized it hurt to bend my knee when I was lying in bed and then the rest of the day it just felt weird. Meniscus tears usually don’t happen from running – but rather an abrupt movement or twist of the knee. I suspect I was just playing with my kids when it happened and just didn’t feel any pain for awhile. For a couple of days my knee just wouldn’t bend and I felt a weird pressure. Then, about 2 days later I looked down and I was like OMG! my knee was the size of a grapefruit. I started icing it and just trying not to do much (which is hard with 2 little ones!). I kept thinking the swelling would go down but it barely did. About a week later I went in to see an orthopedic surgeon and he did an MRI. He then told me that I had torn not one – but both of my menisci in my knee. He offered to “drain” it there to relieve some pressure but I decided not to since I wasn’t in a lot of pain. He said that it may not get worse but that it probably wouldn’t heal on it’s own and many people opt to do surgery. I was really upset and thought I would never be able to run again. But, I decided to try to manage it on my own and see how far I could go with my recovery before giving in to surgery. I had heard that surgery can sometimes make your knees worse – especially if you already have arthritis in that area, which I do from years of running.

I started by really resting my leg and not doing workouts. This was super hard because part of the reason signing up for the marathon was to lose the rest of my baby weight (more on that later!). But, since I couldn’t run at all I was really bummed out. After about 6 weeks of only minimal core and upper body workouts, I added in some light walking. I even tried to jog super slow but the minute I took a few strides I had pain and gave up. After a couple of months mini squats and lunges (1/2 range of motion) were ok but I had to be careful not to lunge or squat too deep. After about 4 months of so-so workouts, I started by walking faster for cardio and doing a little more strength training (If you’d like details on what I did – comment below). Then, I think after about 6 months I slowly started to jog just a little. I still had a tiny bit of uncomfortableness and irritation so I didn’t go far. Over the course of about 9 months I slowly worked my way back up to 2-3 (slow) miles. This past Spring (1.5 years after) I began jogging more and more outside and on the treadmill and slowly increasing my speed. I started adding in more glute and quad workouts too to really stabilize my knee. I feel like this is key. When you have a weakness (often in the glutes or quads) it can offset your knee and make you prone to injury. I had success with this before when I had runner’s knee. Finally, after over a year I was able to get my sprint speed back up! I was so happy a couple of months ago when I was almost back up to full speed at 11.5mph (1% incline) on the treadmill! I really thought I would never get back up to that. It’s still a little slower than I used to do and my overall running speed (and distance) is not like it was before kids – but I have hope!

So, if you have a torn meniscus…here is what I would recommend:

*I am not a doctor and highly recommend you consult your doctor first before deciding to treat any injury yourself. This is just my advice and my personal experience. 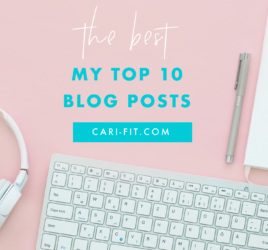 My Top 10 Most Popular Blog Posts 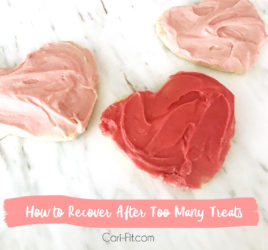 How To Recover After Too Many Treats